I am an Engineer in automation and fine mechanics, born in 1954 in Germany, married and father to a son, working and living since 1983 in Norway nearby the Capitol Oslo in a little town with the name Skjetten.

I am still fully employed and turning wood in my leisure time as a relaxation to the daily routines in the office. 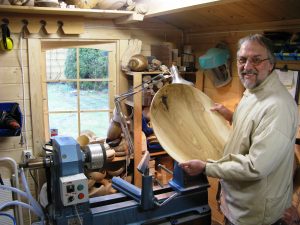 About my woodturning live

Since the beginning of the 90’s of the last century in the past millennium i am turning wood.

It started with a rather primitive setup with a drill-driven lathe i inherited from my father, but very soon  i got caught by the woodturning bacillus. I bought my first real lathe, a British build Tyme Avon with a turn able head-stock with 4 speeds, and started to produce my first objects.

Fortunately i also bought a book from Richard Raffan which teached me. I continued in many years as self-learned woodturner and experienced most of the mistakes and near-incidents you could expect – but i learned a lot form these. I went to fairs and exhibitions and bought more books and videos (this was before the era of now well-known online-platforms) until i came to the point i felt i needed more tutoring to become better.

Around the year 2000 i met Jimmy Clewes on Holmen Gård in Norway where he was demonstrating his marvelous way to turn. I some years later discovered that he was tutoring workshops in Stavanger and decided to participate in 2007 – and it become a great experience. I learned much about tools, design, turning techniques, coloring, decorating and last but not least ex-center turning. It gave me a tremendous push in my work.

The year after in 2008 i participated for the first time in an exhibition in Sandbekkstuen/Lørenskog in Norway nearby where i am living, arranged by the local art club.

The good experience with Jimmy encouraged me in 2008 to book a new workshop with Nick Agar. He fascinated me with his sense for colors and form.

With the impressions of these workshops i continued turning fetching new ideas and challenging my techniques by information from international fora on the internet and in magazines.

In 2011 then i participated on the Woodturning Cruise along the Norwegian west coast from Stavanger to Hammerfest  together with many internationally known woodturners and many woodturning enthusiast like myself. I experienced 11 days full of woodturning demonstrations and almost continuous workshops. It became the most inspiring arrangement i ever participated in.  Among others i met

On the cruise i got known with a woodturner from nearby in Norway which introduced me in to the Norwegian Folk Art and Craft Association and their local woodturning club.  Since than i have been teaching woodturning to newcomers, experienced turners and youngsters (age 14-24).

In 2013 i had my first exhibition in the Lillestrøm Art Association where i displayed 18 of my works and got very inspiring and encouraging feedback.